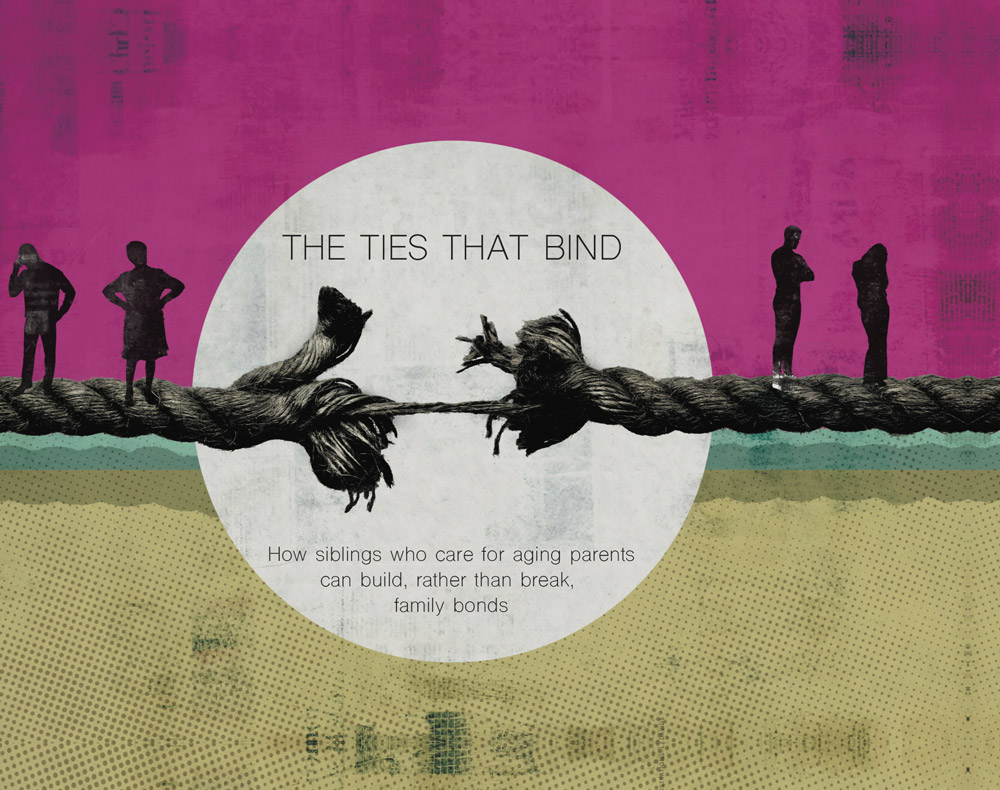 For decades, Everett and Claire McNamara were inseparable. Everett had worked at a noisy book printing press in his youth, which led to progressive hearing loss. When he became deaf, his wife served as his ears.

When Everett developed dementia in his 80s, he became profoundly paranoid. The wee hours became terrifying. “He couldn’t hear,” says his son, Peter, “but he still believed he could hear people trying to get into the house at night.”

Everett didn’t want to go into a nursing home as his health declined, and Claire agreed. “I want him home as long as possible,” she told her seven children–three daughters and four sons who had grown up in the couple’s Irish-Catholic household in Fitchburg, Massachusetts. Six still lived near their parents; Peter had moved to California.

Since Claire, 85, couldn’t manage caregiving alone, aides came during the day. But she hated the idea of strangers in the house overnight. To honor their parents’ wish to keep Everett at home, the McNamara siblings gathered at a sister’s house and hatched a plan. Each night, from 9 p.m. to 7 a.m., the siblings would take turns sleeping at the house.

One sister—a mother with three children at home–stayed one night a week. Another sister, a teacher, took the Friday night shifts. Two brothers covered the remaining five nights a week. One sister who left for work at 5 a.m. couldn’t stay overnight, so she held down the daytime shifts on the weekends. (A third disabled brother wasn’t able to help.)

Peter, a 61-year-old employment benefits consultant in the San Francisco Bay Area, flew back every six to eight weeks to pitch in, too. During his weeklong visits, he’d doze in a chair next to his sleeping father, rising at night to help him to the bathroom.

“I went back because he was my dad,” Peter says. “He made me the man that I am today. It was the least I could do.”

Caring for a sick parent can be overwhelming for siblings. Often, family dynamics beneath the surface “will basically be put on steroids and brought way out in the open because this process is so stressful,” says Anne Tumlinson, who runs a Washington D.C.-based research firm on aging and writes a blog called Daughterhood.

Too often, troubling stories emerge: Siblings can’t agree on a mother’s wishes, don’t help out, or feel free to criticize a caregiver from afar. While siblings are a leading source of stress, they’re also a top source of comfort, Tumlinson says. “When I see siblings working well together, you have a companion through this process, you have somebody to lean on, you have somebody to comfort you.”

What are the secrets of siblings who navigate caregiving successfully? 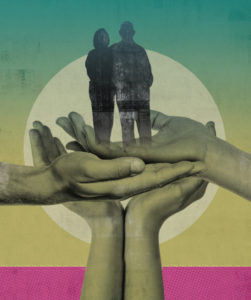 When Lucy Thompson, a teacher in the Twin Cities area of Minnesota, was diagnosed with Alzheimer’s at 59, each of her four children committed themselves to her care. The family all lived within an hour of each other. They had grown close after Lucy and her ex-husband guided their children through a difficult divorce after he came out as gay. “My mother was the most loving, caring person I’ve ever known,” says Adam Thompson, 41, Lucy’s oldest child. “She was fiercely protective of her children, fiercely protective of her students.”

When Lucy took a bad fall and could no longer live alone, her second child, Leah Huxtable, 38, chose to bring her into her home, even though Leah and her husband were raising three young children. Leah’s siblings created a calendar to schedule regular respite for their sister. “Our role became ‘support Leah,’” Adam says. “What can we do to give Leah a break over a weekend or an afternoon?”

Not all siblings rally, though. Some stay away because they can’t stand to see a parent ill and dying, Tumlinson says. “They absolutely can’t deal with it. It’s a state of denial.” When they see a sibling ushering a parent through a hospitalization, they’ll tell themselves, It’ll all be over soon, and Mom will be back to normal.

Others bow out because they’ve had difficult relationships with parents. “Sometimes, there are unresolved things, maybe from childhood, maybe from adulthood, that people are still grappling with,” says Ruth Drew, director of information and support services at the Alzheimer’s Association. When a caregiving sibling asks for help, “it brings out those dynamics in which people say, ‘I’m not willing to do what you’re asking me to do,’” Drew says.

Rather than making excuses, siblings must become aware of their own emotions, consider a sibling’s needs, and figure out a way to contribute, experts say.

“Everybody is going to have to participate in decision-making, as well as share responsibilities and share grief,” Tumlinson said. “It’s better to make a conscious decision at the outset that you’re going to do it in a productive way.”

The Thompson and McNamara siblings took an important step: they created a plan and a schedule, which helps to short-circuit denial and excuses. “If we sit down and make a plan and talk about how we’re going to move forward and how I’m going to help, then we’re acknowledging that everything’s not going to go back to normal,” Tumlinson says.

Plans might include rotating weekend care or staying with a parent to give a caregiver a vacation break. In some cases, siblings have even uprooted and moved closer to a caregiving sibling to help provide hands-on care. Whatever the plan, everyone pledges to stick to obligations and schedules, Tumlinson says. And they communicate regularly about medical appointments, financial matters, and other details. “Thank God for text,” Leah says. “We would have these incessant text chains going on all the time.”

Nevertheless, caregiving is so stressful that conflicts and misunderstandings are almost inevitable, even when siblings have the best intentions.

When Adam Thompson took his mother on weekend outings, she’d put on her best face, he says: “It would be summer, and we’d take Mom out to the kids’ baseball game or we’d take her out on the lake and we’d have so much fun. We’d have ice cream, and it would be lovely. And I’d say, ‘Leah, she’s doing really well.’ And that would frustrate Leah because I’d say things like, ‘I think you need to do more of this stuff with her because she really liked it and that’s what she needs.’”

But the daily realities were vastly different for Leah. “The brunt of it was on me because she lived at our house. She would run away all the time. She would leave the house when there would be chaos going on with my kids, especially around dinnertime. We had to call the police. It was awful.”

When she lamented that her siblings didn’t grasp the intensity of her situation, all four met with a counselor from the Alzheimer’s Association. The meeting helped correct her siblings’ misconceptions, Leah says: “It wasn’t that they were doing it consciously. But living with an Alzheimer’s patient is like living in Groundhog’s Day. Their day is the same every day, and it’s so long. They do the same things over and over and over. It’s frustrating and tiresome and sad. Until you’re immersed in that for a decent period of time, you don’t realize what it feels like.”

Her siblings stepped up, including offering to leave work to take their mother to medical appointments. “I often didn’t let them anyway,” Leah says, “but it was just the offer that made a huge difference.”

But the same survey revealed that caregivers found relationships with siblings more strained than with any other family member, especially if they didn’t receive enough help or support or felt that their siblings didn’t understand what they were going through.

Not only do siblings often underestimate the burden on the main caregiver, but guilt can create stressful dynamics. “When one sibling is taking on more than the other–oftentimes in a well-meaning relationship–what happens is that the one who lives farther way or has a busier job or whatever will feel really guilty,” Tumlinson says. “It’s insidious, but the way they deal with their guilt is they subconsciously identify the ways that their sibling is doing everything wrong. And they will call up and criticize because that’s their way of making themselves feel better.”

“One of the secrets is to be aware of your own feelings of guilt,” she adds. “If you’re feeling guilty, it’s not your sibling’s responsibility to make you feel less guilty. It is your responsibility to address that, however you do it. If you find yourself critiquing your sibling, either in your mind or openly, ask yourself where that’s coming from. For every critique that you feel you need to offer, can you offer two or three words of encouragement to offset it?”

Siblings’ conduct during this fraught passage often colors their relationships for years, experts say. Bonds of trust are strengthened or weakened. Hard feelings can persist long after a parent dies, Drew says: “Hurts could take a long time to heal.”

“Think about what your parents would want for you,” Tumlinson says. “The most heartbreaking outcome of your illness would be that your children lost their relationship with each other over it. When you commit to a collaborative process with your siblings, you’re giving a gift to your parents. It’s their legacy, ultimately. You’re giving them a family by ensuring that you can have a strong relationship afterwards.”

Lucy Thompson died three years ago—almost five years after being diagnosed–and her children say they remain close. “Being the most forceful personalities in the family, Leah and I have always had our sibling clashes and rivalries,” Adam says. “We fought like cats and dogs when we were kids, and now we have a wonderful relationship.”

Since Lucy’s passing, her youngest son, Mark, became the father of triplets. All four siblings have children now. Recently, Leah planned a gathering for her daughter’s fourth birthday. Schedules were so busy that the clan could only fit in a breakfast celebration on a Saturday morning, Leah says. Everyone showed up for pancakes. As for the McNamara siblings, they rotated nights for a year until their father died at age 86, passing away in a hospital bed set up in his living room. Peter McNamara realized that through all of the hardships, the grandchildren were watching, too—and learning by example. Recently, his daughter, Megan, 23, told him, “If you get sick like Grampy, I’ll take care of you.”